A white gaming rig is the ultimate dream for many. It is a strong and unique color that makes your gaming setup stand out. A white motherboard is perfect for gamers who want to add elegance to their setup and make it more attractive.

As motherboards come with different form factors, performance and features. We’ve reviewed and categorized the best white motherboards based on that. 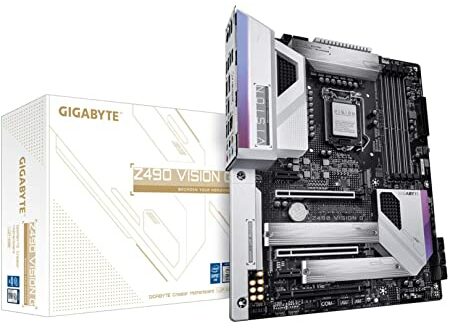 If you’re looking for a white motherboard, no doubt you’ll go with the best-looking white motherboard. The Gigabyte Z490 Vision G tops our list because of its aesthetics that is enough to grab anyone’s attention.

It features a silver and white design with hints of violet details. Apart from aesthetics, its performance is quite impressive for gamers too. The M.2 heatsinks and metal shrouds are more whitish and operate effectively.

Nonetheless, It supports 5000MHz DDR4 RAM with separate heatsinks. The Realtek audio codec is powerful enough to enhance the gaming audio. Moreover, its rear panel supports 8x USB 3.2 ports at a lower price than ASUS boards with the same features. 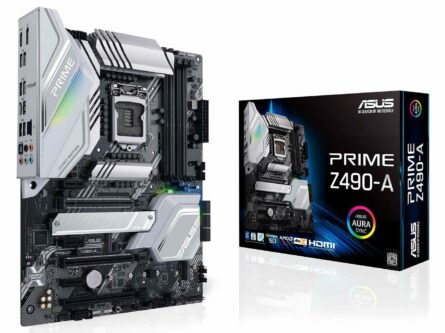 Among the mid-range white motherboards, ASUS Prime Z490-A remains at the top. As compared to ROG Strix Z490-A, the Prime model is 15% cheaper and features a lot of white details including the chipset covers, VRM heatsinks, M.2 slots as well as rear panel armors.

In terms of specs, this board comes with 12+2 phases VRM design and is capable of running processors efficiently. The 4800MHz DDR4 memory support is enough to outperform gaming and highly-intensive tasks.

However, for GPU-intensive games and tasks, consider the best graphics card compatible with Z490-A. It’ll help boost your PC performance and your investment will be worth it. 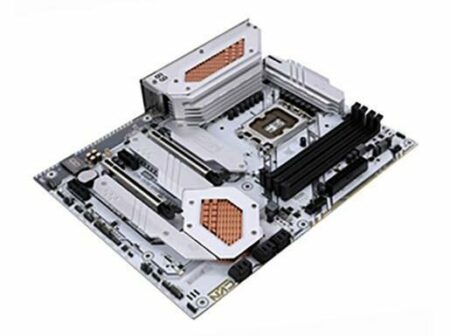 The CVN Z690 is currently the sexiest white Z690 board available on the market. Although its design is exceptional, it lacks a few premium features that could’ve made it our first choice. It supports DDR4 memory capped at 4800 MT/s while the MSI Z690 Force comes with DDR5 support.

The company claims that it offers an 8-channel HD Audio codec for better audio connectivity. In terms of connectivity, you get a LAN chip of 2.5Gbps and Wi-Fi 6 support. For those looking for an all-white Z690 motherboard equipped with a white PCB, we consider this motherboard as ideal. 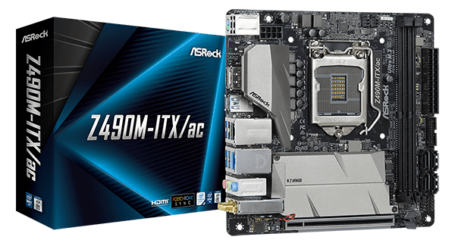 ASRock Z490M-ITX is not fully white, it includes a silver shade. However, it’s the most stylish Z490 Mini-ITX available with white details. The board looks attractive work efficiently with the Core i5 processors.

Despite its Mini-ITX form factor, you get 2x M.2 slots featuring a heatsink. Furthermore, this board supports 4400MHz DDR4 memory plus 4x SATA III ports. Considering its price, the WiFi 5 chip and Bluetooth connectivity seem reasonable.

As compared to Ryzen 5 3600 motherboards, you get fewer features. However, considering the priority of white color, this board is perfect for average gaming and tasks. 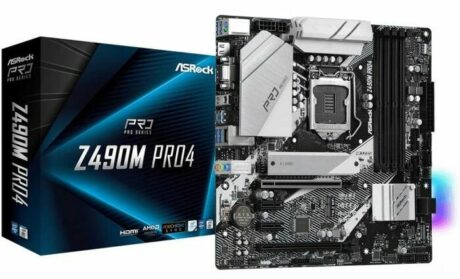 If you’re looking for a Micro-ATX based white motherboard, the ASRock Z490M Pro4 is your gateway to the only M-ATX based board available in white. Its VRM heatsinks as well as PCB have tons of white details that enhance its beauty.

Considering its specifications, the board is quite solid and comes with 10 CPU phases VRM which is considered weaker as compared to ROG Strix Z490 (12 CPU phases), However, the difference in pricing makes it a viable option.

The ASRock Z490M Pro 4 specifications aren’t very impressive. You get memory support of DDR4 with 4500MHz speed and 1x M.2 slot, and the other slot reserved for a WiFi card. Its rear panel provide 5x USB 3.2 ports and 1x USB-C port for connectivity.

The Realtek ALC 1200 codec is impressive for powering its audio section. In addition, it has a 1Gb LAN port but lacks WiFi. Overall, most alternatives offer more features. However, none of them is white. 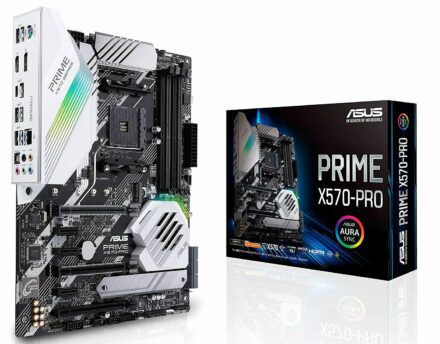 If you’re searching for the best white motherboard built for the X570 chipset then ASUS Prime X570 Pro should be your pick. You’ll get plenty of white details as well as a little RGB effect. The Rear panel and chipset heatsink of this board pair seamlessly with the white PCB making it a stunning white X570 based motherboard.

Specifications-wise, this motherboard is a solid performer. Its (12+2 phases) VRM section is capable of running an overclocked Ryzen 9 processor. In addition, its memory support features DDR4 RAM with 4400MHz speed that is fast enough to satisfy most users.

The board features 6x SATA III ports and 2x M.2 slots in which one slot features a heatsink. Furthermore, the support for Crossfire and SLI is quite impressive. Its LAN port is limited to 1Gb and lacks wireless connectivity. 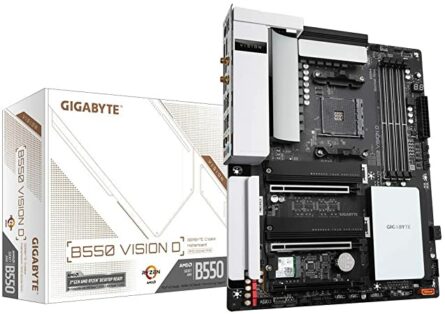 The final spot for the best white motherboard in our list goes to Gigabyte B550 Vision D. It is preferred for its stylish white design along with premium features. It perfectly syncs with Ryzen CPUs and delivers unexpected performance.

The only drawback of this motherboard is that the M.2 heatsinks are gray instead of flashy white. Apart from that, the specs are excellent. The VRM is so impressive that you can freely pair it with any of the Ryzen processors.

It supports DDR4 type memory which can go up to 5000MHz speed. It is impressive even for professional gamers. Regarding storage, you’ll get 2x M.2 slots and 4x SATA III connectors. In addition, it has AMD crossfire support.

The Gigabyte Vision D B550 board is equipped with Wi-Fi 6 and Bluetooth 5 connectivity. Also, you are given dual gigabit (1+1GB) LAN and 6x USB 3.2 ports with 2x USB-C ports on the rear panel.

We selected these white motherboards based on their compatibility, features, pricing and more importantly their white designs. Furthermore, every white motherboard presented to you are reviewed by us and their specifications are checked for accuracy. 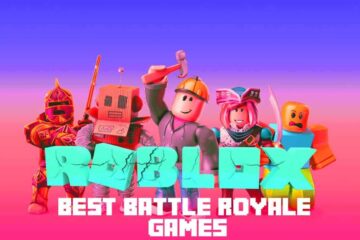 Roblox is a popular online multiplayer game that allows players to compete against each other in a variety of different environments. One of the most popular games on Roblox is the “Battle” game. These games Read more… 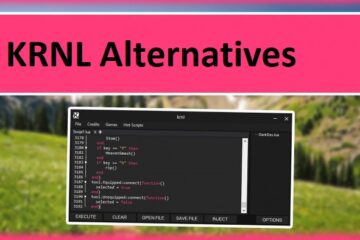 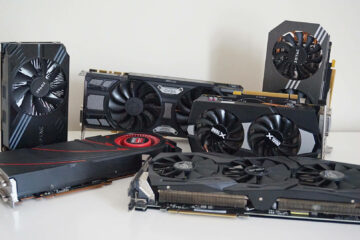 Are you also building a high-spec gaming PC for you? Well, if you are, you must know how important it is to have good graphics. And we guess that’s what got you here. Check out Read more…